Olive Oil or EVOO? Are you using the wrong one?

Olive Oil production reaches 300 thousand tons each year, making Italy the second largest olive oil producer in the world. If you are thinking this is a lot, actually Italy used to produce double the quantity, around 600k tons each year, up until the beginning of the 21st century.

However, since 2000 olive oil production has been dropping year after year due to the high production costs and the low selling price.

Another key fact to note is that over two-thirds of the olive oil production in Italy end up becoming extra virgin olive oil.

Olive Oil: what is it exactly?

I’d like to share with you this olive oil definition given by Wikipedia in Italian. Don’t worry, I’ll translate it for you in just a second.

According to Wikipedia, olive oil is an edible oil extracted from olives.

We will later look at the small differences in production that distinguish one oil from the other. 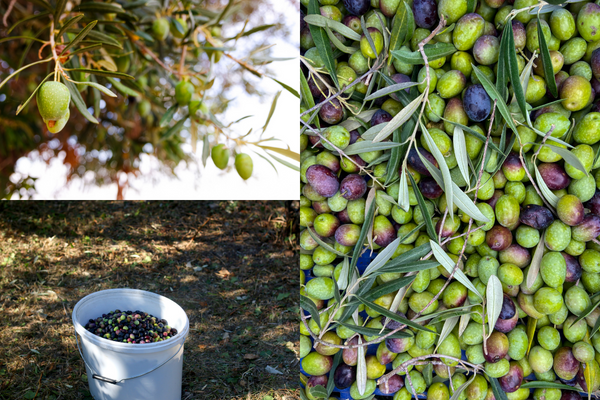 Collection – olives collection or harvesting is one of the most important steps of the entire olive oil production process. The quality and final taste of the extra virgin olive oil produced depends on when the olives are collected and how they are collected. Collection differs from olive to olive; in fact, the harvesting season for different olives happens at different periods. Independently of the period of collection, it’s fundamental to wait that the olives darken before harvesting them. It’s at this stage that they contain a higher quantity of oil.

Did you know that there are many ways to harvest olives, both manual and mechanical? I am sure you might have heard of picking olives directly from the tree branches. Producers can also wait for the olives to fall on the ground naturally. Another manual way of collection is to gently hit the branches with a wooden stick to aid the natural detachment of the olives from the branches.

Mechanical collection happens in a similar way but using machines that surround the trees and aid the process of detachment. In some cases, these mechanical methods can, however, damage the olives.

Storing – harvesting and storing are intertwined. It’s important to harvest the olives at the right time, but then it is equally important to store them immediately and correctly. Leaving the olives on the ground might affect the final extra virgin olive oil taste. The ideal scenario is to take the collected olives inside the storing facility within 48 hours from collection. It’s equally important to store the olives in aerated plastic containers, not wooden ones, to ensure that no fermenting or molding occurs.

Leaf removal and washing – this process is one of the simplest ones but equally fundamental. Removing the leaves is necessary because pressing the leaves together with the olives would affect the taste and quality of the extra virgin olive oil. And of course, washing all the olives with clean water, changed frequently during the washing process, is necessary for maintaining high hygiene standards.

Pressing – this is probably the most exciting step because it’s at this stage that we start seeing the first signs of oil. The olives are pressed using appropriate machines and turned in olive paste. The machines used can be old stone machines, or more modern stainless-steel ones.

Kneading – after the olive oil paste has formed, it’s essential to separate the liquid from the solid parts of the olive. This occurs through kneading the olive paste in big mechanical metal containers that allow the olive paste to reach the right temperature for the extraction of the oil. 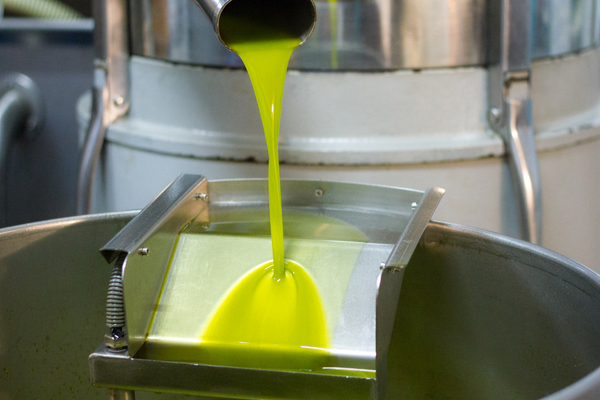 Extraction – in the past, done through pressing; nowadays, extraction of extra virgin olive oil mostly occurs through centrifugation, and consists in separating the olive oil from all the solid parts. The centrifugation extraction method is the most efficient because it allows the separation of pulp, water, and olive oil simultaneously.

At this stage the EVOO is technically ready to be used. However, the final stage will allow it to reach its highest quality.

Storing and bottling – After extraction, the EVOO can appear slushy and contain some residue. By storing it in metal containers, the oil is allowed to go through a natural filtering system. This consists in helping all the solid particles to drop to the bottom of the container. It’s also at this stage that the extra virgin olive oil is tested to be certified.

And then it’s time to bottle it. This stage is divided into two fundamental steps that make sure the oil doesn’t come in contact with neither air nor light. First the oil is transferred into containers that will allow the pouring into the bottles. Finally, the oil will be poured from those containers to dark coloured glass bottles.

Each of the 7 steps must be executed carefully and fairly quickly so as to ensure the extra virgin olive oil is at its highest quality when it’s bottled and sent to be sold.

Now that you know how extra virgin olive oil is produced, it’s time to discuss how it differs from olive oil. 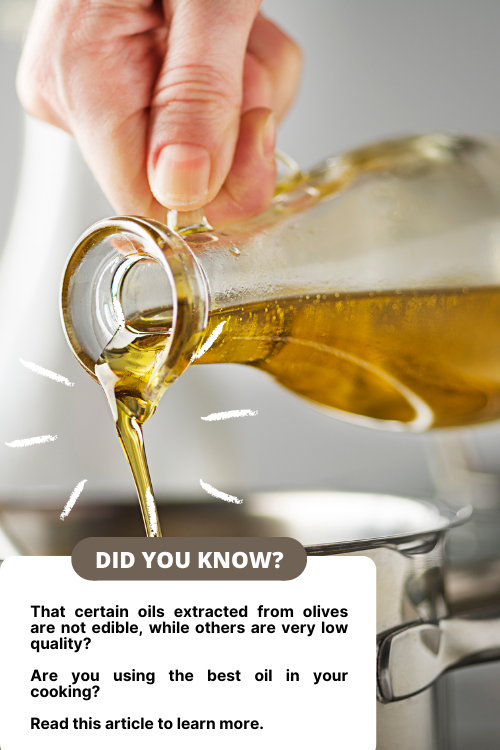 EVOO. What is it and how is it different from olive oil?

These are the criteria required to be certified as extra virgin olive oil:

If the oil produced from the first pressing of the olives doesn’t meet all the above criteria, it can’t be called EVOO. Instead, it’s called Virgin Olive Oil, with an acidity of 2 gr per 100 gr, or 2%.

If you’ve read so far, you now get that if the olives are high quality and a strict oil production process is followed, the oil obtained from the first pressing of the olives will most often be EVOO.

If not, the oil might be classified as Virgin Olive Oil, as long as its acidity is below 2%.

Just one factor, the acidity of the oil obtained, changes everything. The same olives, and the same process, can give you three different types of oils.

You can now understand how important production testing and certification is. Without it you could be eating something that is actually not edible.

The next 4 oils are not obtained from the first pressing but from refining, diluting, and mixing oils.

Refined Olive Oil is obtained through refining Lampante Olive Oil. The refining process makes this oil edible, but as you can imagine the quality of this oil is extremely low. The acidity is much higher than EVOO, and the oil has no trace of fruitiness.

Finally, there’s Olive Oil. I can now give you a more detailed definition of olive oil.

“Olive oil is obtained by mixing extra virgin olive oil with refined olive oil. It has an acidity lower than 1%.

Do you remember how we said that during extraction and storing of oil there are many particles that need to be separated from the oil? Well, those particles are not discarded. They are used to produce another type of oil, called Olive Pomace Oil. This oil is not edible as it includes chemicals.

Olive Pomace Oil can be turned into an edible oil after a refining process plus the addition of a certain quantity of extra virgin olive oil. 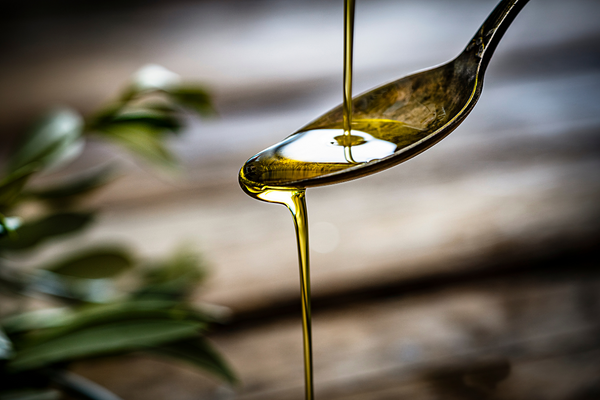 Where to buy Extra Virgin Olive Oil, if you want the purest and freshest type?

Important factors contributing to a higher quality EVOO include the olives used, the producer, the time of production, how fast you get the EVOO after production, or how long the EVOO has been sitting on the shelves.

Unless you are an EVOO connoisseur with the right connections, the only way to get an extra virgin olive oil that is pure, higher in quality and fresher than the average supermarket olive oils is to get it from the right supplier.

You need someone who knows the producer directly, personally checks the quality of EVOO, and can get that EVOO to you quickly after it has been extracted and bottled.

Taste with Gusto is proud to be that supplier in Ireland. Since 2016 we have been supplying thousands of Irish families with a fresh and delicious extra virgin olive oil called Novello.

Novello comes from our producer in Puglia every November and is a limited edition EVOO. You can only get it this time of the year, just once a year.

Here are the key characteristics that make Novello so special.

Novello is good for your taste buds and your heart – Here’s how the Great British Chefs describe a high quality and fresh extra virgin olive oil like Novello.

”Roughly 75% of it consists of monounsaturated fatty acids, which are fantastic for cardiovascular health, and it’s packed with polyphenols and vitamin E, which contain antioxidants that benefit the body in all sorts of ways (source: NCBI). This makes it one of the healthiest oils you can use in your cooking, be it frying or drizzling.”

Novello is incomparable to supermarket EVOO – clients who pre-order Novello get it a week or two after it has been produced, which means that it’s super fresh, and the antioxidants are at their peak. That means you are getting an extra virgin olive oil that tastes fruity and delicious, almost as if you are tasting it while it’s being produced. You are also getting a health tonic full of nutrients and antioxidants.

If you compare Novello to a supermarket EVOO, you must keep in mind that your supermarket’s extra virgin olive oil might have been on the shelves for nearly 2 years. By law, EVOO can be packed up to 12 months after pressing, and sit on shelves for up to 18 months. 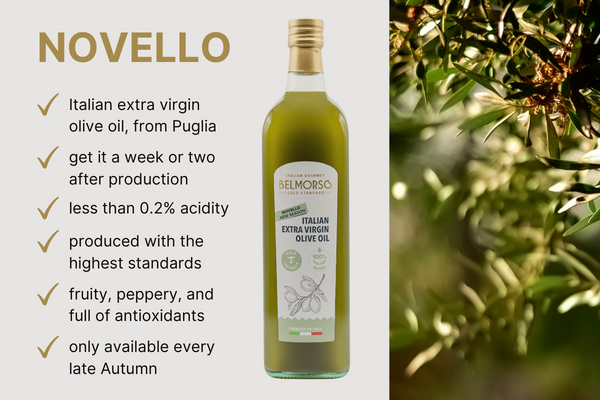 Have a look at what others who have purchased Novello say about it.

Annick Garvin says: ”Amazing, happy healthy olive oil for my food. Really makes the difference to my dressings and my meat. Loving it… ”

Kay Mulcahy says: ”This new season extra virgin olive oil is the most amazing oil I’ve ever used. I’m so glad I bought 3 bottles. Fabulous for cooking, salad dressings and putting some in the mashed potatoes instead of butter. Many thanks for an amazing product.”

Catherine Melly says: ”Amazing taste.  Am so pleased with it. I don’t know how I bought other supermarket brands for so long. There is no comparison to the flavour and taste of this olive oil. ”

Alice Fitzmaurice says: ”I have been using Novello for about two years now and it’s the best I’ve tasted, and very good value.”

If you are still looking for the highest quality pure and fresh EVOO, which is delicious but also good for your health, you should try the Italian EVOO Novello.

How can you get Novello?

If you are reading this anytime between November and March, you might be in luck. We might still have a few bottles left which you can purchase online here.

If you are reading this in Spring, Summer, or early Autumn, the best way to get Novello is to subscribe to our email list. Our email list members are the first to be informed when we open Novello pre-orders in October, and they also get the best prices. Sign up to our email list here.

By checking the box above you authorise us to use the information provided in this form to communicate with you by email and phone and send you weekly newsletters, product updates, special offers, free tickets to events, and other marketing content.You can unsubscribe at anytime by clicking the unsubscribe button at the bottom of each email you receive. Your information is safe with us. For more information on our privacy policy visit our website www.tastewithgusto.ie.