Panettone Cake: How to Choose the Best One

A soft, yeast-leavened bread, usually with candied fruits inside, panettone cake has a dome shape that gives it a regal appearance. Although its origins might be regal, this is a Christmas delicacy that has been enjoyed by all Italians for centuries, no matter their social status.

For us Italians, panettone cake means sitting around the table with the family, cutting many slices, and handing one to each family member. Panettone is synonymous with the Christmas season; it symbolizes a delicious moment enjoyed with loved ones.

Obviously, the more delicious the panettone cake is, the more enjoyable that shared moment will be. We’ll discuss later the different types of panettone and how you should choose the best for you.
First, let’s go back in time, and talk about who invented panettone cake. 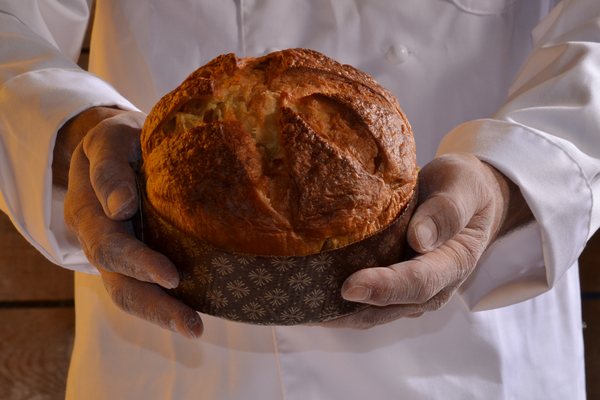 Who invented panettone? Was it the cook, the lover, or the nun?

We don’t know who invented this delicacy, but we can choose to believe one of the three famous legends about it.

The first one is my personal favourite. Ludovico il Moro was an Italian nobleman, known as the Duke of Milan, who ruled from 1494 to 1499. It was Christmas Eve and his cook, Toni, was preparing a delicious banquet. Fortunately, he burnt the cake and decided to use a small bread ball of dough he had set aside for his family’s Christmas dinner to re-make the dessert. He worked the dough delicately and added eggs, raisins, candied fruits, and sugar. The result was so delicious that the Duke’s family named it Pan di Toni and started featuring it in family meals.

Another sweet legend about panettone cake sees a nun in a convent in Milan as the main character. Her name was Suor Ughetta (suor means nun), and she might have invented panettone while trying to make an extra special version of bread for Christmas. Like Toni, she added sugar, eggs and candied fruits, and finished the bread with a cross design at the top. The other nuns loved it so much that they started spreading the word across the city. All of a sudden, the convent started receiving many donations in exchange for one of those sweet loaves of bread, which we now know as panettone.

Finally, the third legend says that Ugo – the falconer for Ludovico il Moro, started helping the local baker Toni, the father of the girl he was in love with. Toni was already making a loaf of bread similar to panettone. However, it lacked butter, which Ugo added secretly during the night. Butter was rare at the time and Ugo was able to get it in exchange for some hawks he gave away. The next morning, the bread that came out of the oven was so delicious that Toni couldn’t stop selling it. Panettone cake made Toni rich and gave Ugo the blessing to marry his daughter Adalgisa.

Tell me, which one is your favourite legend? Some say that the third can’t be true as butter was not available at that time. However, other sources say that butter has been available since 1500 BC, so any of these legends might be possible. 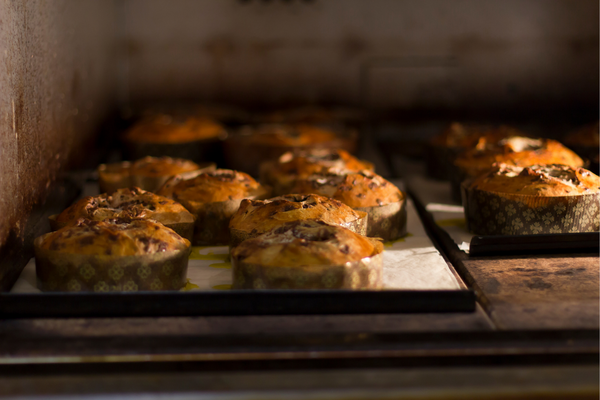 How panettone is made

The recipe is quite difficult, and the bread requires several hours – nearly twenty – to rise.

The dough needs to be worked twice, even three times – once on the first day and again the next day.

To make a proper panettone cake, one needs to use a special kind of strong flour, called Manitoba. The other ingredients include natural yeast, eggs, butter, sugar, raisins, candied fruits, vanilla, honey, and malt.

A fundamental step is refreshing the yeast multiple times a day. This is necessary since the yeast is alive and needs to be fed. You might have heard of this process if you are familiar with baking sourdough bread. You need to take the yeast out of the fridge, leave it at room temperature for one hour, and then feed it water and flour – half its weight in water and its weight in flour.

Similar to what we did with our quick-rise pizza dough, panettone requires heat to rise, but unlike our pizza dough, it needs to rise for hours and a continuous supply of heat.

That’s all I am going to share about making the recipe, as I have never made it myself, and I doubt you want to spend two days baking panettone when you can buy a delicious one online.

Panettone: where to buy it?

Speaking of buying panettone cake online, if you’d like a gourmet panettone made following the traditional recipe, like Toni’s and Suor Ughetta’s, get this one. 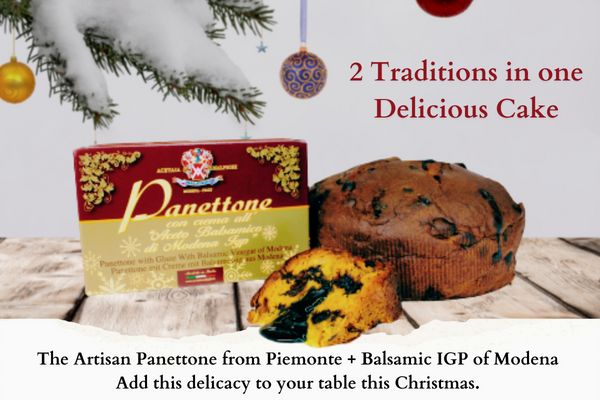 It’s a gourmet panettone cake with the addition of a cream with balsamic vinegar of Modena. I am pretty sure you have never eaten a panettone cake this unique and fragrant.

Along with being delicious, it brings two old traditions together beautifully. The first is the tradition of panettone cake, born in Milan but also made popular in Turin, and the second is the tradition of Balsamic Vinegar of Modena IGP (with its Protected Geographical Indication).

We can deliver this panettone to all of Ireland, and Europe, except for the Uk. This is a limited edition that comes every year in a small batch, so get yours now before it’s all sold out.

How long will panettone keep

Many panettone cakes can last weeks after being opened. However, one that is artisan or freshly made will only last a few days, just like a regular cake. I doubt your panettone cake will last more than three days in your cupboard, especially if you share it with family and friends. 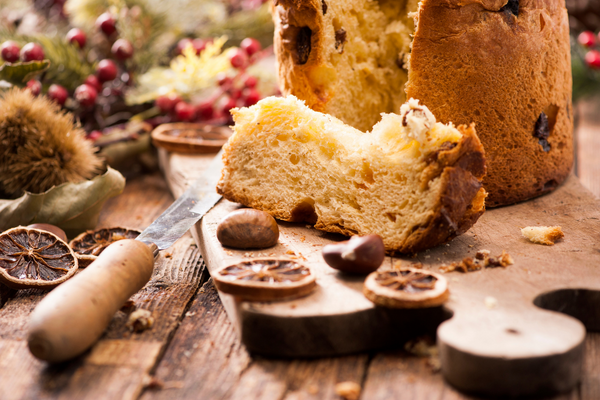 Panettone: how to serve and how to eat it

If you have never eaten panettone before and want to try it for the first time, I urge you to eat it on its own. After all, that’s exactly how you are supposed to enjoy it – a slice of panettone after a meal, followed by a digestif.

Even if you’ve tried panettone before, if you are going to try our Balsamic IGP Panettone, we suggest eating it as it is. The same holds for any other panettone cakes you try.

The only time you want to serve and eat panettone in any other way, is when you have panettone leftovers that are not fresh. The panettone it’s still good but has gone a little dry. Or maybe you have many different brands and types of panettone cakes that are open, and you want to use them all.

In this case a common way to use panettone, and also a very easy one, is to make a glass dessert layering slices of panettone cake and alternating with layers of crema pasticcera, the famous Italian custard. You can even add liquour.

Another popular way to use panettone is to turn it into a French toast.

You can also use panettone as a base in a dish, top it with either cream, jam, chocolate, or even ricotta cheese, top it with more panettone and bake it. The panettone will get slightly crunchy, especially if it has been open for a few days. The final result is almost like a sbriciolata.

While many outside of Italy might call them both panettone, they have different names because they are different cakes.

Unlike the panettone, Pandoro seems to have been invented in Venezia or Verona. In fact, it was in Verona, and precisely in 1884, that Domenico Melegatti started producing and selling Pandoro as we know it today.

As for the recipe, there are no raisins nor candied fruits, only vanilla along with sugar, eggs, butter, flour, and icing sugar. Speaking of flour, regular flour 00 is used, unlike panettone that uses Manitoba flour. Pandoro, like panettone, requires a double dough method and almost as many hours to rise.

If you haven’t tried either, don’t try to decide which one to try. You have to try both panettone and pandoro. Buy both, serve both, and let yourself and your guests pick your favourite. Like Panettone, there are different types of Pandoro, with different fillings. My suggestion is to start with a high quality traditional plain option. Remember pandoro is already heavily iced with sugar, so the simpler the inside the better. 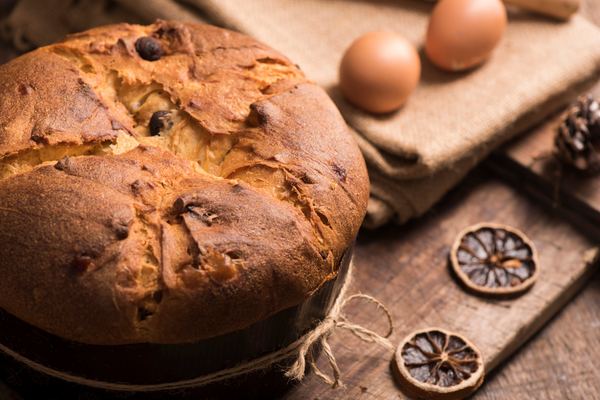 Panettone: how to choose the best one

I am going to end this post with the answer to your question. I hope you got some useful information throughout the article.

There are many types of panettone you can choose from. Here’s a list:

Which one you choose depends on your preferences. Something else that you should keep in mind when choosing a panettone is who is going to eat it. You probably don’t want to give your small kids a rhum panettone. What do your guests like? Do they like candied peels and raisins, or do they prefer chocolate?

These are the questions to ask.

If on the other hand, you are going to enjoy panettone on your own, why not try different types, and then choose your favourite?

When gifting panettone, a gourmet one like Our Panettone with Cream of Modena Balsamic IGP is a great choice. It’s a classic with a twist and you’ll be gifting something that your friends have never tried before.